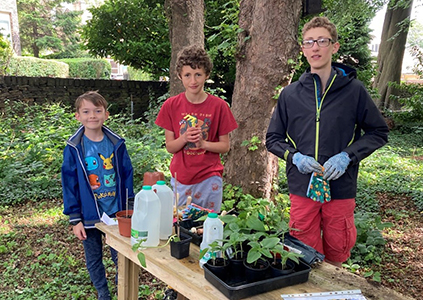 The community have pulled together to make great progress on the transformation of the grounds at Holy Trinity. Volunteer Co-ordinator, Helen Astin describes their achievements to date.

“For nearly two years now I have been privileged to be involved in the regeneration of our churchyard. Work started in earnest in 2019 on a site which had been sadly neglected. The overgrown shrubs and tangled undergrowth had led to much anti-social behaviour, and of course, it was a waste of an excellent community area which could be put to good use.

"The first priority was to bring the shrubbery under control and open up the sight lines, making it a safer place. Street lights which had been completely hidden by ivy were uncovered. A group of Prince’s Trust volunteers undertook the recovery of the grade 2 listed lych-gate which was covered in ivy and self-seeded trees and shrubs. Ivy was also removed from the church building itself and from many of the large trees. The Thursday Dig-It team worked wonders.

"By early 2020 it was noticeable that local people had started using the footpath again. There was a marked reduction in anti-social behaviour, and even the amount of dog-fouling reduced!
Since then, in spite of COVID, we seem to have moved forward by leaps and bounds.We’ve planted some new native hedging donated by the Woodland Trust and cleared overgrown flower beds and introduced new planting. We’ve created compost bins and 6 wire leaf bins. We’ve put up 16 bird boxes, 6 feeders and made a ‘Buggingham Palace’. We even built some small raised beds using materials found on site and some garlic, parsley, broad beans, rhubarb, strawberries, mizuna and raspberries were planted. All the street lights, railings and gateways were repainted and many parts of the boundary stone wall were repaired.

"We even had time to do a survey of fungi and lichens present in October/November 2020. It was amazing how many different kinds we found. And in May this year a wild flower survery (for Churches Count on Nature) revealed 66 species.

"Now that restrictions are lifting it’s exciting to watch the Garden get busier.  We have already had 3 Family Dig-It sessions on Saturday mornings. We have a prayer trail, a children’s activity trail and a story telling area, with a lovely ‘story chair’. The Thursday morning community Dig It sessions have blossomed with 31 people in the garden last Thursday. The numbers were boosted by the Princes Trust team who were building a children’s den and a new bug hotel.

"What’s next? Regular toddler sessions, bushcraft for older children, grow,cook and eat sessions and much more community involvement. Push off Covid…we’ve got work to do!”

Finally, what do you value about being a member of SF&G?

“I love knowing that we are part of something bigger and that all across the country colleagues are working for the same ideals.” 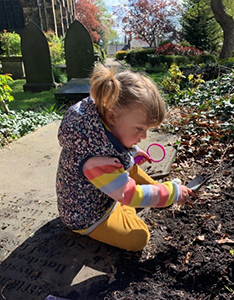 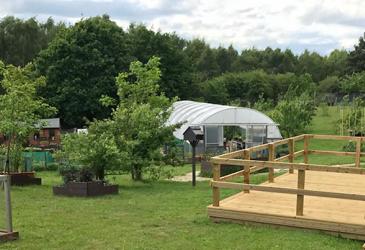 Feel Good Gardens values local food and community, getting outdoors, enjoying the seasons, understanding more about nature, and welcoming everybody to site regardless of age, gender, race or disability. 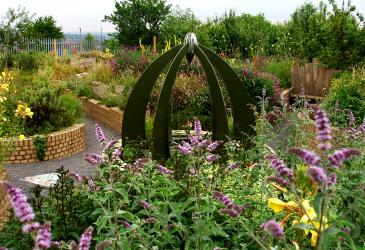 Scotswood Garden works with nature to create a great place for people and wildlife to enjoy. The garden is about community, whether in Scotswood and Benwell or the wider area, and they welcome people of all ages and backgrounds to get involved in the work.