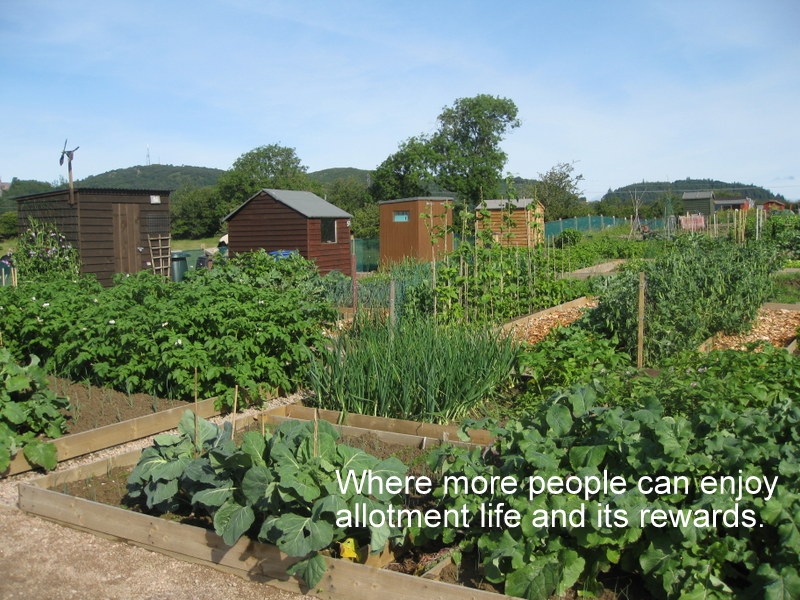 Dalbeattie Community Allotments Association came into being at a meeting held in Dalbeattie Town Hall on 16 April 2008 which was attended by 19 people. From that meeting a Committee was formed to drive the Project forward, with the aim being, that Dalbeattie would once again have its own allotment site.
Over the next two years the Committee explored a variety of options to try to turn that dream into a reality, and although they encountered numerous obstacles setbacks and frustrations along the way, they were not deterred from their main aim of providing an allotment site for Dalbeattie.
The Association were given a huge helping hand when a local landowner, very generously offered an opportunity to enter into a long term lease on land just on the edge of town. The lease was to be for 25 years at £1 per year, and needless to say it was gratefully accepted.
On Friday 30th April 2010 the lease was signed, and on Saturday May 1st work began on the site.
‘People Power’ then took over and a remarkable transformation occurred. Through sheer determination, goodwill, and masses of hard physical work, an allotment began to emerge, and within six weeks we had gone from an empty field to an operational allotment, with members tending to their plots while still helping to develop the site for others.
It was that kind of community spirit which helped attract the attention of numerous local sponsors who helped both financially and practically, and an enormous debt of gratitude is owed to them all for the vital part they played. Of particular note was an extremely generous donation of £5,000 from the Rotary Club of Dalbeattie.
The original site consisted of 48 plots with an array of sheds, poly tunnels, raised beds and compost bins, all tended by people from the Town, but our landlord was so impressed with with what had been achieved that he offered us more land. We now have a site with over over 75 plots; reflecting the demand for this type of community resource.
We have also become something of a benchmark for other allotment projects throughout Dumfries and Galloway, and have been visited on numerous occasions by enthusiastic groups who would like to learn from our experiences and achieve similar success.
To provide this award-winning facility, (We won 'Stewartry Community Group of the Year Award' 2011) for Dalbeattie has been a remarkable achievement and one which has been made possible by the hard work, determination and generosity of not only those who have plots, but also local residents who have supported the project throughout each stage of its development.

CEVAS (Countryside Educational Visits) Training Dates
Wednesday, January 1, 2020 - 10:00 to Thursday, December 31, 2020 - 16:00
The Countryside Educational Visits Accreditation Scheme is a nationally recognised accreditation, the scheme offers training for individuals who are working – or plan to work – with groups of school children, young people or clients with additional...
Free Webinars on COVID -19 issues
Thursday, May 21, 2020 - 11:00 to Monday, June 1, 2020 - 16:00
SF&G have launched a series of online webinars designed to help members tackle the huge challenges arising from this crisis and to share best practice and inspiration from around the country. Themes are based on what members told us were the...
Growing Care Farming: National, Regional and Online events
Wednesday, May 27, 2020 - 09:00 to Friday, March 31, 2023 - 17:00
Growing Care Farming: National, Regional and Online events Growing Care Farming,  is part of the Government Programme for Children & Nature (supported by Defra, is funded by the Department of Education and managed by Natural England) and is...

CLAS Cymru helps in £1.1m Big Lottery win for Newtown asset transfer
CLAS Cymru, the community land initiative managed by the Federation of City Farms and Community Gardens,  has helped support a consortium of locally based volunteers, community enterprises and organisations in Newtown, Powys, to secure a £1.1...
Report highlights benefits of community growing
A Glasgow University study on community gardens in the city, including three Federation of City Farms and Community Gardens (FCFCG) members, has outlined their positive effect on individuals and communities. Glasgow’s Community Gardens: Sustainable...
Force of nature: the battle to save London’s green spaces
London culture magazine 'Huck' has its finger on the pulse for community matters in London. This month they interviewed Social Farms & Gardens for their article 'Force of nature: the battle to save London’s green spaces'.  Writer Jessica Furseth...
New project demonstrates benefits of outdoor learning
A new Natural England-funded project to demonstrate the enormous benefits of outdoor learning to children and develop a model(s) of using ‘hub’ schools to support and deliver teacher training, is now available. The project, which is funded by...
Protecting community farms and gardens
As part of our 40th Anniversary celebrations we’ve partnered with experienced and specialist insurance broker, McClarrons to deliver a special event to help these essential community spaces to secure the right insurance. The event has been postponed...

Choose an option from the list to find out what’s happening in that region.