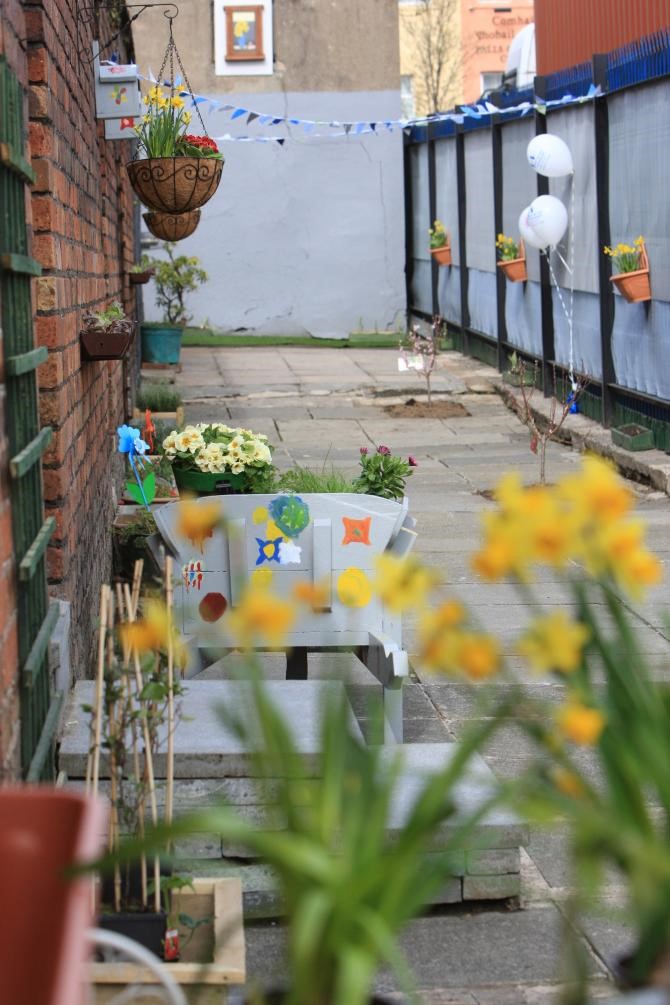 The West Belfast Partnership Board opened the newly greened alleyway behind La Salle Gardens off the Falls Road. The West Belfast Partnership Board (WBPB) teamed up with Springvale Learning to transform the alleyway behind La Salle Gardens adjacent to Willowbank walkway, from a ‘dead space’ into a residential friendly, green area. WBPB was allocated funding from Northern Ireland Environment Link (NIEL) through the NGO Challenge Fund from the Carrier Bag levy, to undertake this alleyway regeneration project.
Local residents, trainees from Springvale Learning and children from Gaelscoil Na Bhfal, Glenveagh School and Park School helped to convert the alleyway into an environmentally friendly space. The green area now contains four raised beds to grow fruit and veg, hanging baskets, compost bins, bird boxes and seating areas that local residents can use. Local garden centre, Dobbies donated plants, compost and tools through its ‘Here We Grow’ community scheme.

Up to 40 residents from the Holylands, an area renowned for wild parties and street drinking, created the colourful project in a bid to reclaim the neglected alleyway. Brid Ruddy, the chairwoman of the College Park Avenue Residents Association, who has lived in the area for 25 years, claims the development has "reduced isolation". The 65-year-old said: "It's really helped lift the community spirit. Even the students come in and help by doing some painting. It's a practical way of meeting students. Queen's has been very supportive and donated plants. It's transformed this area.” A range of plant boxes and containers with wildflowers and herbs line the alley while fences are painted with multi-coloured designs. Residents searched through skips and discarded rubbish and used bricks, old benches and buckets to create the country-look. See their Facebook page
The garden has inspired many others to clean up their alleyways, including Miracle Way, and the nearby Rossmore and Ardmore Avenues.

“It was Wildflower alley that inspired us to start. I was at the launch and felt so depressed, I thought  ‘Why don’t I live here? You could never do this where I live….’ It was when I got home and had a conversation in the street with a couple of neighbours that I began to consider what could be done...”
From these initial conversations Caroline Magowan and her friends organised a clean up day followed by a tea party. They posted flyers to their neighbours. They borrowed brushes and shovels from the council. To begin with only 2 people were helping with the clean up, while others watched, but by the end 30 people had joined in, and they got the alley cleared in an hour. 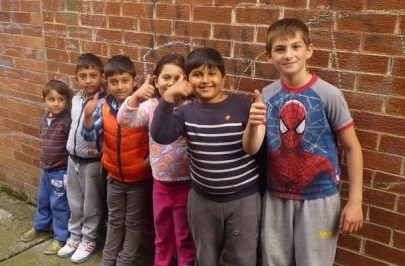 “It was great to get the support from the council and the Wildflower Alley people,  and gave the day a positive buzz. From that day 2 more key people emerged, so now we were 4 grandmothers, getting things done. We felt inspired and started painting. We set a deadline for getting it done, for our launch, which helped motivate people. It was slow, but by the end 28 houses had painted their back walls. Local traders provided the paint, and really got behind the idea.”

Caroline believes support for the project comes from nostalgia for the ‘good old days of the troubles’, when people knew their neighbours. Nowadays there are more speculators buying up houses, and more of a turnover of residents.

At the launch of the alley residents named the space ‘Miracle Way’, Miracle being an anagram of Reclaim, and also because one resident had said they would be miracle workers if they were able to achieve a clean alley. 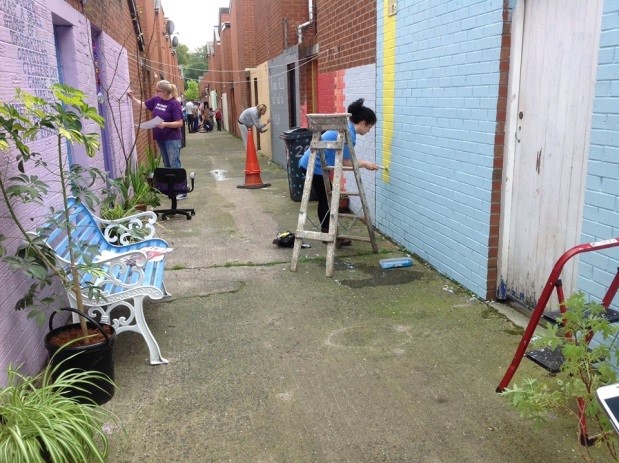 The streets nearby have a good number of problems with rubbish collection, straying bins and dumped rubbish. Caroline said that she spent the first few months of being involved getting to know intimately all the different departments of the council, and key contact people for each, and has had great success with building relationships with some of them. This kind of knowledge is invaluable, not only for helping serve her own neighbourhood, but also potentially for helping others to understand how to interact with the council over rubbish collection.
The group did enquire about ownership of the space, and found that it is owned by DRD, but managed by the council, who had no objections to them using the space –perhaps another good example of guerrilla gardening.

On finding out about an opportunity to apply for funding the organisers were reticent to go for it – not being constituted, and coming from community working backgrounds, they were aware of how funding can impact on small projects. But one resident took on to manage the funding, and they got a ‘Live here love here’ grant from Belfast City Council, which they used to build benches, buy hanging baskets, a fire pit, a BBQ and storage boxes, with the help of TCV. 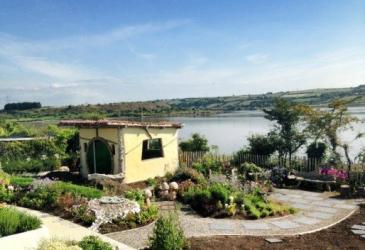 Blossoms at Larne Lough specialises in using Nature-based Therapy to increase health & wellbeing and decrease stress. It is run from a purpose-built therapy garden on the shore of Larne Lough. 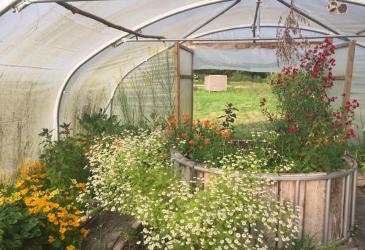