Green Isle Growers is a collection of three community growing projects in and around Machynlleth in Mid Wales. The Green Isle Growers run a veg box scheme, Dyfi Land Share matches local people with land on which to grow, and Edible Mach builds and maintains edible growing spaces around the town.

Green Isle Growers began in 2012 as a workers’ cooperative of five people aiming to grow food sustainably to sell to the local community to address the need for locally grown food. Growing on a small patch of rented land in a walled garden at Ynyslas, the aim was to grow in a way that promotes biodiversity and good soil health.

After a whirlwind first year of hard work, long days travelling the hour journey by train to and from Machynlleth to Ynyslas and many a meeting in the seafront pub, the five volunteers managed to start up a very small veg box scheme with ten customers in the local area. The SF&G Mid Wales Development worker provided regular one-to-one support to the project, and ran training in project management and governance to help the group establish a structure and way of working.

When rent on the walled garden became unsustainable and transporting produce to market on the train was proving too arduous, the cooperative turned to land sharing to find space on which to grow closer to Machynlleth and their customers. They worked with local people who offered plots of land to borrow, all within cycling distance of Machynlleth.

Inspired by the success of their own land share, Green Isle Growers then started Dyfi Land Share to help other people in the Dyfi Valley get access to land, connecting people who wanted to grow food with local land owners and running their own food growing workshops. After initially raising £4,500 through a crowdfunding campaign, Dyfi Land Share now has a part-time member of staff working to match local people to land on which to grow.

In 2013, the local community were starting to think about ‘edible towns’ and how public spaces in Machynlleth could be used to grow food. With support from the SF&G Funding and Enterprise Officer, Green Isle Growers made successful funding applications to the Cooperative Community Fund and LUSH, and ‘Edible Mach’ was born. With hard work from volunteers from the community alongside the cooperative members, Edible Mach started growing food in Machynlleth’s library, train station, leisure centre, parks, cooperative store and police station.

The SF&G Mid Wales Development worker held a visioning session for Edible Mach to help the community shape the future of the project. A funding brochure was produced as result of that visioning session, which fed into a successful funding application to the Ashley Family Foundation. Edible Mach is now working with the local housing association and other groups to bring edible plant displays to new parts of the town. In 2015 SF&G arranged a study tour for Edible Mach and other community growers in Mid Wales to visit Incredible Edible Todmorden in Todmorden, Yorkshire, the birth place of the incredible edible movement.

The veg box scheme at Green Isle Growers has now evolved into a cooperative of local growers providing fresh vegetables in and around Machynlleth. Rather than small scale growers competing with each other for customers, six small teams of growers feed into one veg box scheme for the area. Regular meetings are held to discuss who will be growing what, allowing cooperative working and support between all the stakeholders, creating a stronger local food network. 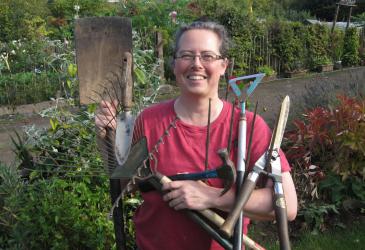 Shoots Of Success In Scotland

Getting hold of fresh fruit and vegetables at truly affordable prices can be a real challenge in deprived neighbourhoods. With support and guidance from our Scotland team, Tullibody Community Garden has tackled this issue head-on. 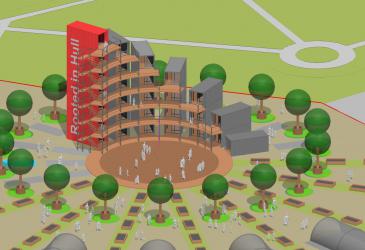 Our work with groups in Hull has not only nurtured a network of community gardens, but also paved the way for a pioneering mobile city farm, which aims to become a unique micro-farming enterprise. Find out how Social Farms & Gardens has helped make Hull growers thrive.